Nothing beats the savory unpretentiousness of fried chicken. Consider it the quintessential Southern comfort food. It should come as no surprise, then, to find this crackling culinary staple at Cary’s Lucky 32 Southern Kitchen — but only on Wednesdays.

According to Lucky 32 Executive Chef Jay Pierce, the chicken is served from 4 p.m. until the restaurant runs out. Pierce's concoction represents a rendition of the late chef Austin Leslie’s recipe spotlighted in John T. Edge’s book "Fried Chicken: An American Story."

Pierce’s recipe calls for buttermilk instead of evaporated milk and also includes smoked paprika. The chicken, which is seasoned and air-dried in a cooler overnight, is sourced from Hopkins Poultry of Browns Summit near Greensboro. It’s cooked in rendered lard from Cane Creek Farms of Snow Camp, N.C. 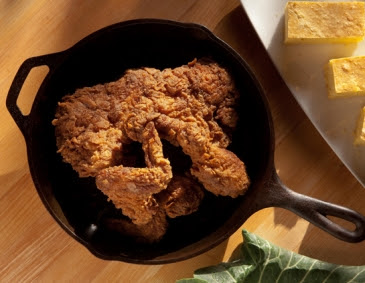 Consider it 19th-century style fried chicken since Pierce uses lard instead of unhealthy hydrogenated vegetable oil. I like to think of it as pure Carolina goodness on a plate.

The $17 three-piece dinner features a breast, leg and wing and is served with delicious fatback-enhanced collard greens, skin-on mashed potatoes with giblet gravy and a hunk of cornbread for dipping.

Be sure to pair it with a glass of iced sweet tea. You'll be glad you did.