Regan, a trained chef who hails from Fort Myers Beach, Fla., met Dawn, a Singapore native and practicing attorney, at the French Culinary Institute in New York. He honed his chops at the renowned Gramercy Tavern, among other fine-dining establishments, while she spent time staging (similar to interning) at iconic eatery Blue Hill at Stone Barns in Pocantico Hills, N.Y. The couple relocated to North Carolina in 2008, when they began planning to make their reverie a reality.

To say that Little Hen is an ambitious venture would be to understate the situation. After all, it’s certainly not every day — if ever — that bucolic gastronomy hits southern Wake County. But the Stachlers believe the time has come for the area to embrace a sustainable concept with the objective of offering seasonal cuisine prepared from locally grown ingredients.

Already, the couple has aligned themselves with Bobby Tucker of Siler City’s Okfuskee Farm, who will purvey the meat, vegetables and grain to Little Hen. Supporting local farmers is a core tenet of Little Hen.

A versatile chef who churned out a tableful of appetizers, side dishes, entrees and more recently,  Regan does not shy away from delivering an eclectic array of modern American cuisine. Ponder this diverse lineup that arrived at the table: roasted fennel with heritage pork salami and poached duck egg; local carrots with a honey sherry gastrique and toasted almonds; house-made sausage served with arugula chimichurri and watermelon radish; a whole young local chicken with a scallion béchamel, Christmas lima beans and grits; and scratch-made ricotta with blueberry and apple compote, an after-dinner cheese course. 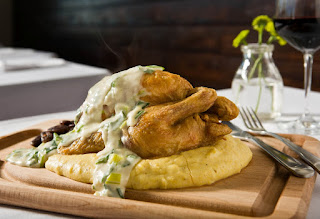 Photo courtesy of Jonathan Fredin/S&A Cherokee
Regan says the menu will remain fluid, and there are no limitations to what we Little Hen will feature. The menu will evolve often and will largely depend on what is sourced to the eatery.

Also exciting is the recent addition of Scott Frye, the restaurant’s talented pastry chef. Originally from Winston-Salem, Frye graduated from the Culinary Institute of America in Hyde Park, N.Y., and then went on to pastry school in Paris.

On the occasion I visited, Frye presented an exquisite assortment of desserts, including a pine-nut tart with rosemary cream, a lemon cream tart with fresh fruit and a life-changing good goat cheesecake encrusted in hazelnut brittle with blood orange sauce. 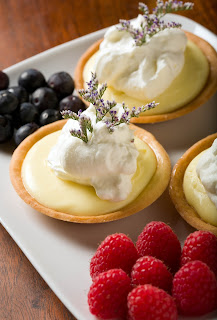 Photo courtesy of Jonathan Fredin/S&A Cherokee
Lest you think it’s all about the food at Little Hen, the 70-seat dining room makes a tremendous first impression all by itself. Industrial-style exposed ductwork and a high ceiling coalesce with modern farmhouse décor to create a contrast that beckons patrons to come and enjoy an inimitable dining experience. Where else around here will you find white linen tablecloths and rustic agricultural implements under the same roof? Consider it farmhouse chic.

Added touches like fresh flowers in vintage glass milk containers and framed chalkboards on the walls do not go unnoticed. Then there are the funky Edison lights, distressed wood benches and floor-to-ceiling windows that only enrich the overall ambiance.

Closed on Mondays, Little Hen is open for dinner service Tuesday through Saturday. Reservations are accepted. The restaurant's phone number recently changed to (919) 363-0000.