Get Fired Up at Barry's

Nothing excites me more than finding a mom and pop restaurant owned by first-class people. That’s certainly the case with Barry’s Café at Swift Creek Shopping Center near Cary. More than just a local burger joint, Barry’s has served as an outpost for firefighters and rescue personnel since 1994. That year Barry Doyle received his first call to provide food to an exhausted emergency crew during a bitter ice storm.

Since then, Barry has continued providing free emergency food service, started the not-for-profit Feed the Firefighters Foundation (www.feedthefirefighters.com) and has received kudos from the likes of Southern Living and People magazine for his heroic efforts. You won’t find a finer humanitarian anywhere.

From day one, Barry’s has served up some of the best char-grilled burgers in the area. These are presented in Papa (8-ounce), Mama (5-ounce) and Baby (2.5-ounce) sizes with choice of American, Swiss, cheddar or provolone cheese. Potato chips, coleslaw or applesauce are on the house, but it’s worth the extra cost to add the delectable beer-battered seasoned fries. 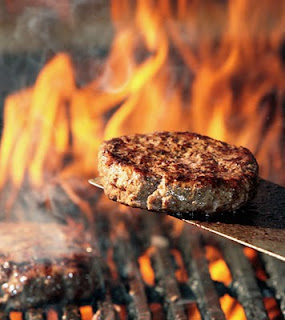 Photo courtesy of Jonathan Fredin/S&A Cherokee
Breakfast is available all day every day, including an irresistible cheeseburger and eggs platter. Barry’s also serves seriously good omelets and pancakes, so you really can’t go wrong with whatever you order from the breakfast menu.

When it comes to décor, Barry’s features an array of firefighter paraphernalia—helmets, uniforms, patches, and, well, you get the idea. What’s more, Barry’s is an elbows-on-the-table, paper-napkin style establishment that’s as comfortable as a pair of old Levi’s jeans.

Over the last few years, Barry has battled various health challenges, so he hasn’t been around the eatery quite as much. His wife, Denise, has courageously stepped up and soldiered on with the business. Whenever you do see Barry these days, he’s just as gregarious and gracious as ever. Heroes like Barry deserve our patronage, don’t you think?